For the moment it is only ECG.

A few months ago I started working on a DIY EEG machine with a bio-major undergrad friend of mine. Here is my attempt at writing a lab notebook for the project after the fact.

The very first prototype was based on an instructables.com page. The project described there has some arbitrary sounding choices (especially the notch filters schematics), however it is a nice starting point and I am grateful to the author for the inspiration.

What we decided upon with my friend was the following setup:

Yet it did not work…

We started testing on ECG signals as they are much stronger than EEG ones.

The output from the first stage was always saturated due to the DC difference between different parts of the body. Occasionally we would get a signal, but it would quickly disappear as the electrodes charge and saturate the instrumentation amplifier.

This was the single change with greatest effect on the final signal quality. After that we actually got usable ECG signals.

For best signal quality we just put the ground electrode and one of the differential electrodes in the mouth, while the other is on the chest.

The biggest issue currently is the 50-60 Hz noise coming from the mains electricity. If the electrode wires are too long the noise completely drowns the signal. We had to be extremely careful with grounding all our circuits as well, because in the noisy environment in which we worked even one floating ground caused bizarre high-frequency noise from various equipment in the room.

We were measuring the noise with respect to different electrode configurations, filter configurations, gain levels, etc, (with varying rigor) before deciding on the changes to the circuit in order to have the simplest working solution.

The modification we plan for the next version are:

The power supply is a 9V battery divided into a bipolar supply with a 741 op-amp.

In the pictures the case is not finished. In the final version the electrodes would be terminated with an audio jack, not directly soldered to the circuit. In the same way, the output would be accessible through and audio jack instead of the currently used jumper cables. 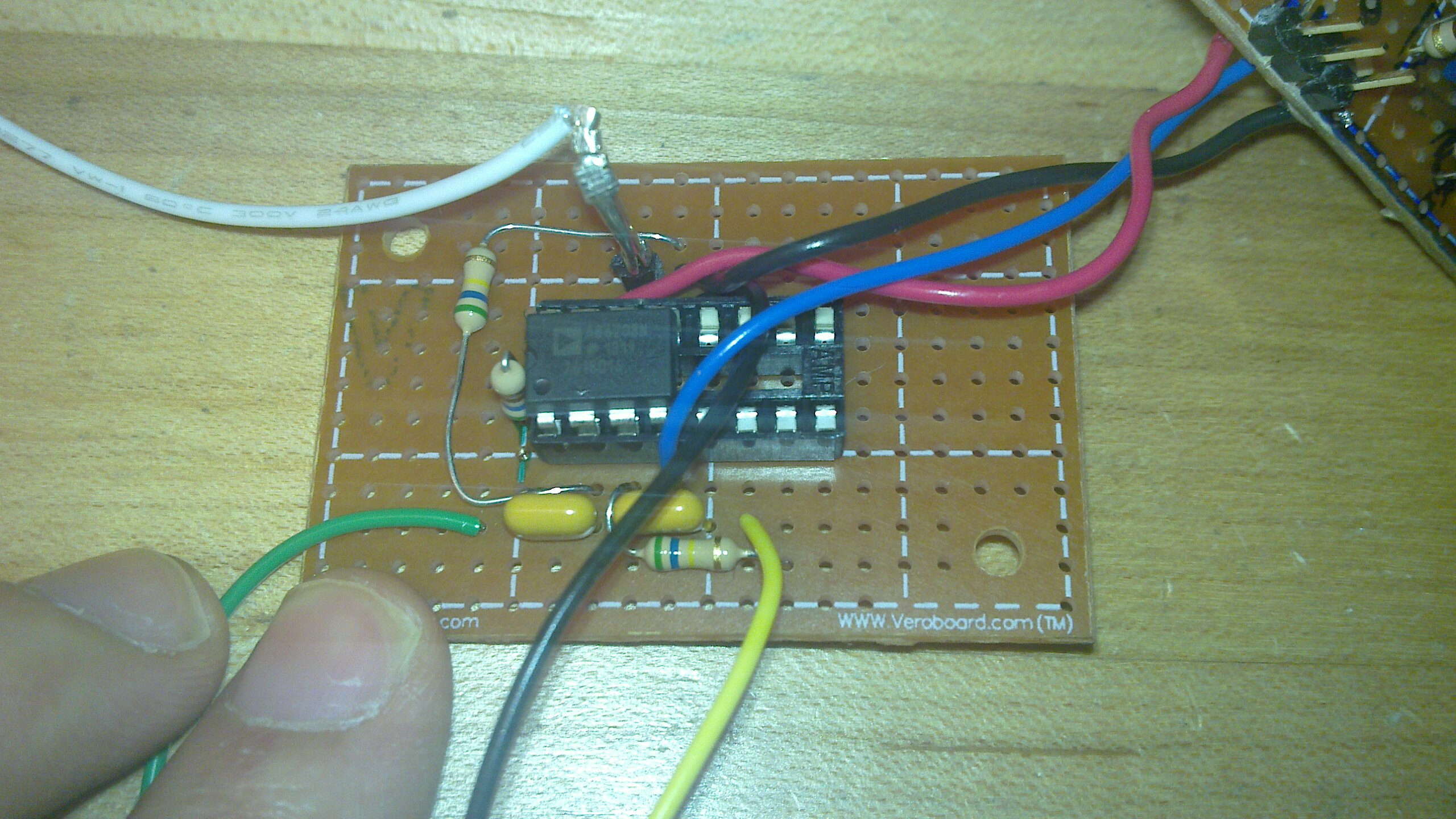 The instrumentation amplifier in the first stage. The capacitors and resistors at the bottom are the passive high-pass filters. 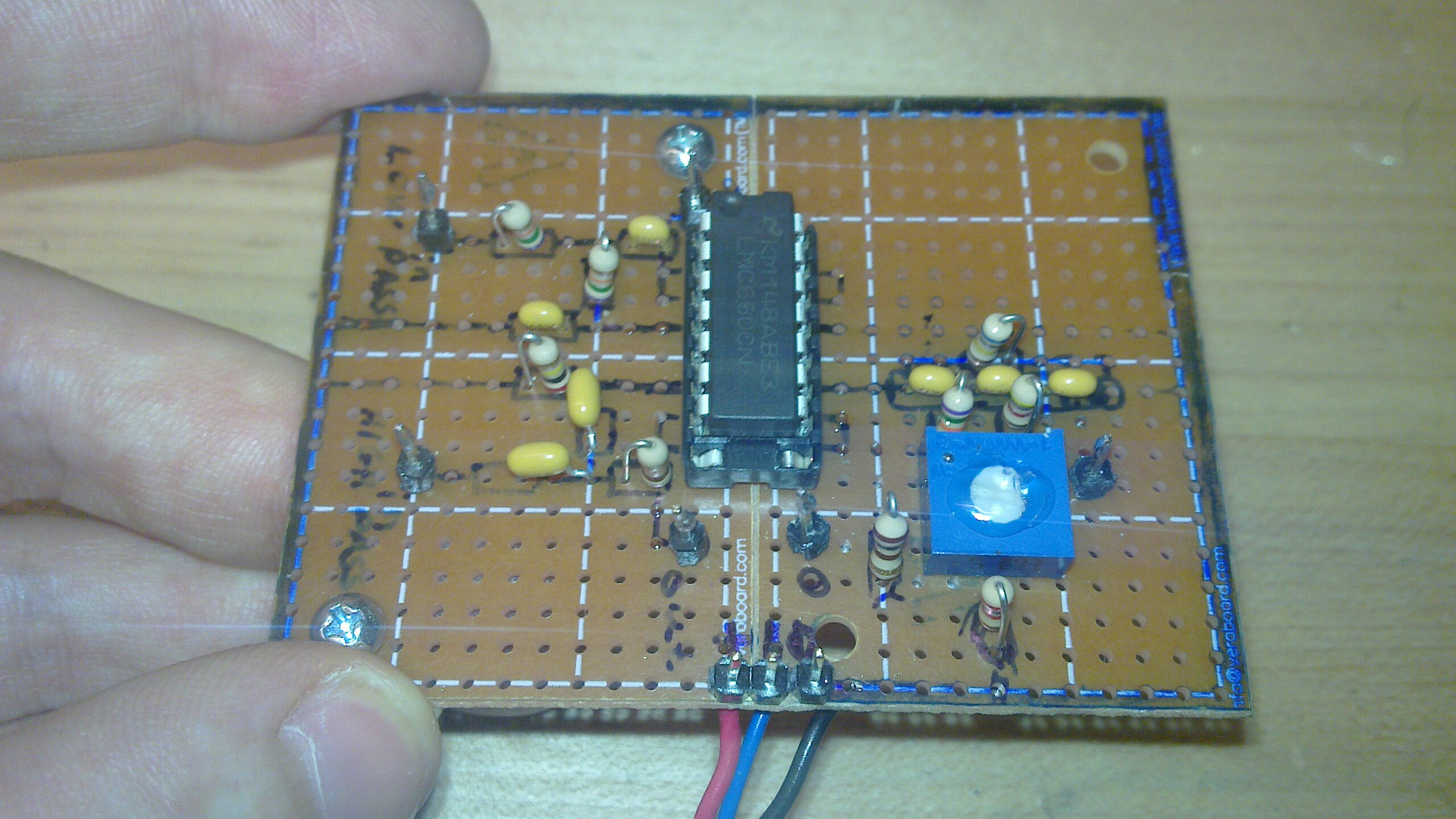 The three filters in the second stage. Their order can be interchanged with appropriate jumper cables. On the right is the notch filter. 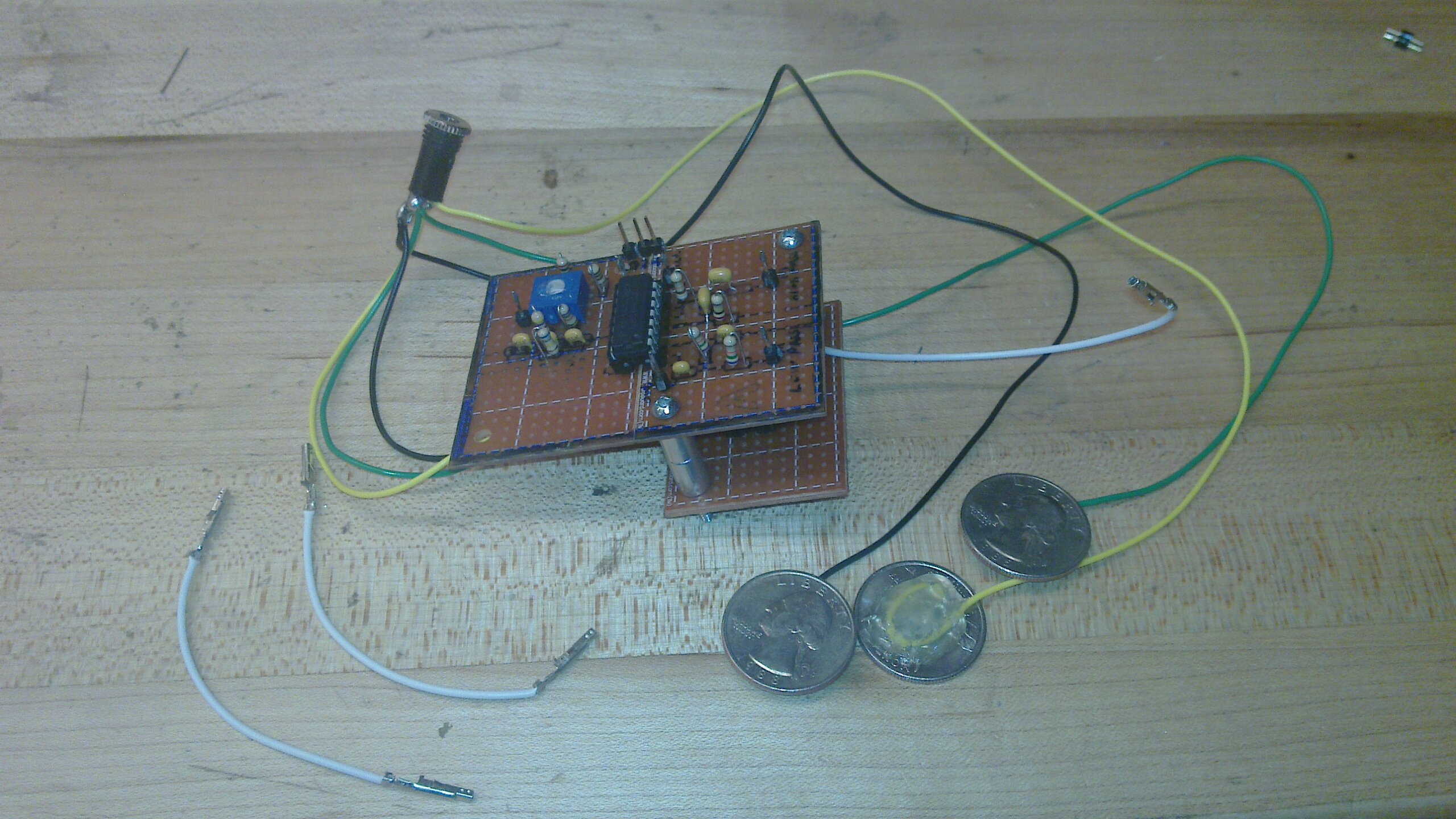 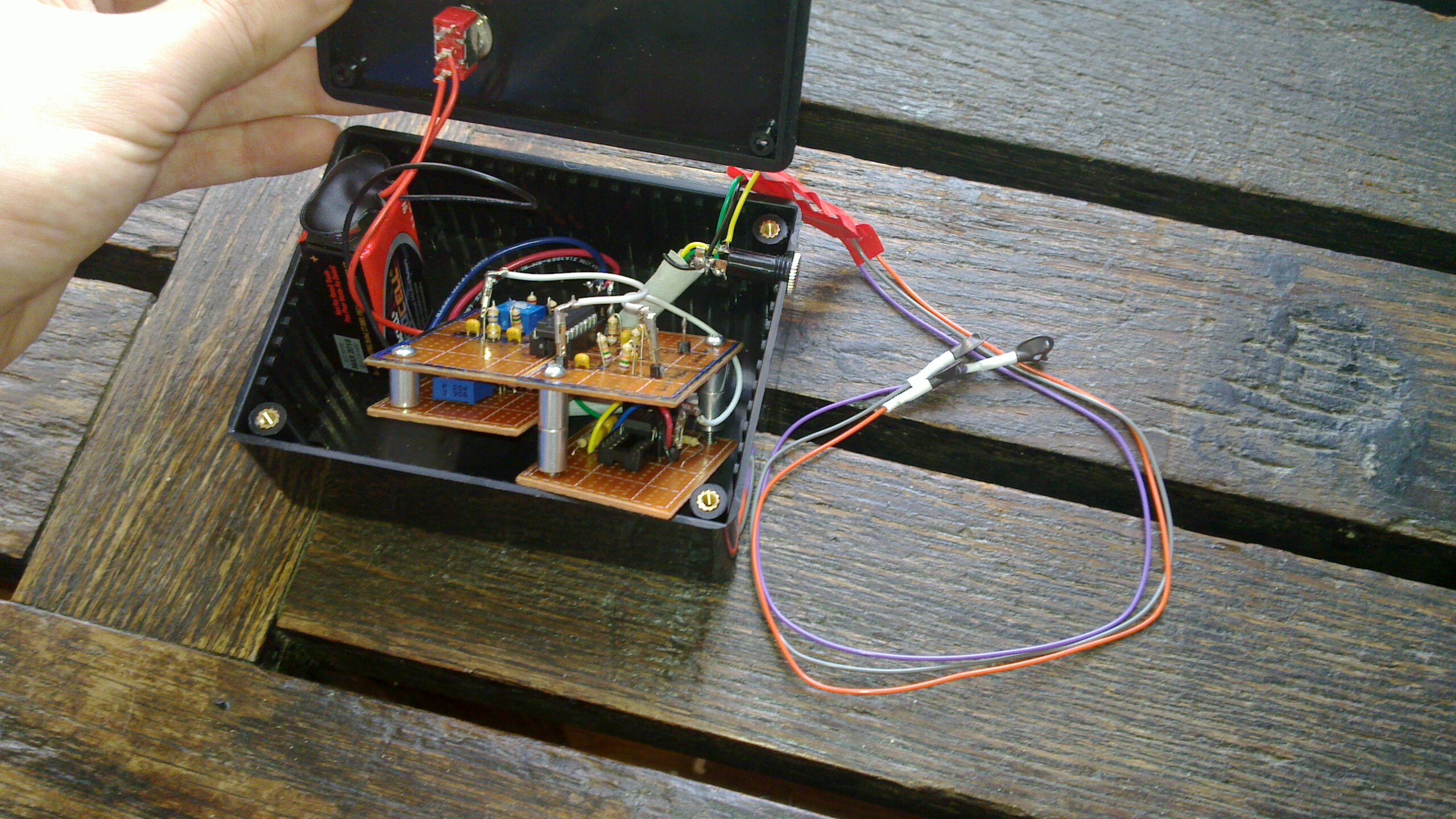 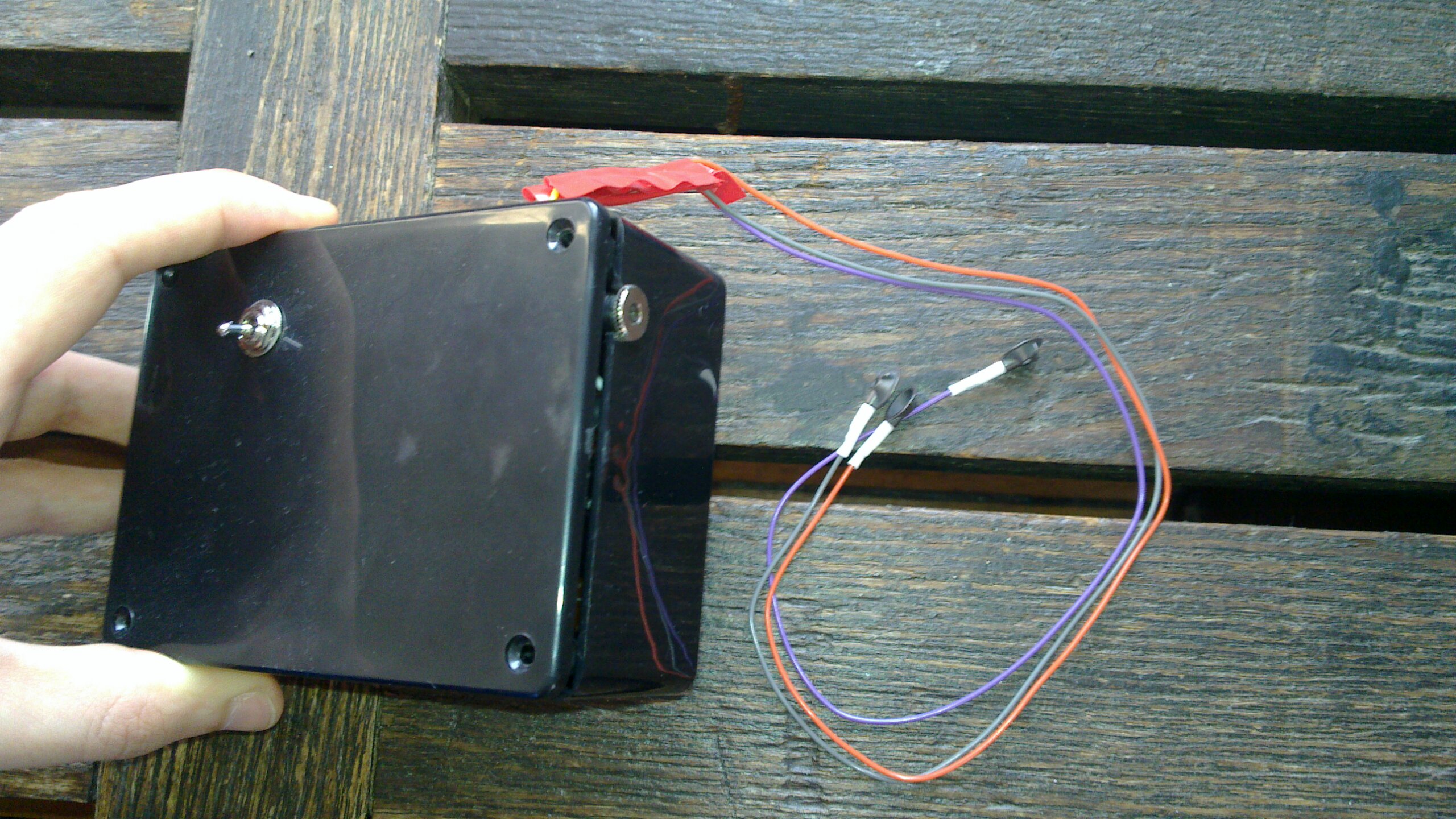 There should be a second audio connector for the output. And the electrodes will be on an audio jack in the first connector instead of directly soldered. 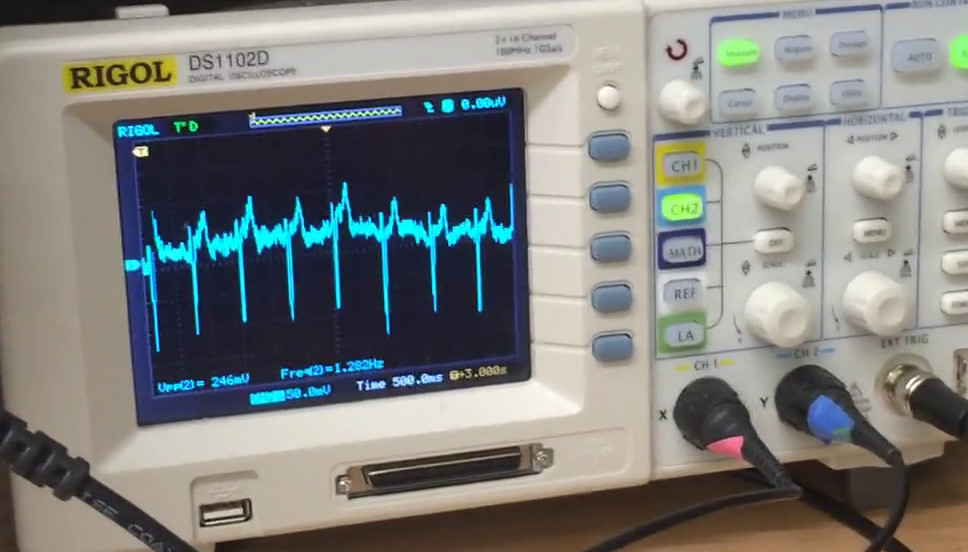 And a picture of an actual signal trace.

Many thanks to Holly Mandel for suggesting the project and working on it with me.